“My name is Muybridge and here’s the answer to the letter you sent my wife.”

The trigger pulls, the muzzle flashes, the bullet cracks, and Major Harry Larkyns is dead – shot at point-blank range in an act of pre-meditated vigilantism.

This event is not fiction. It happened in California on October 17th, 1874. The perpetrator was Eadweard Muybridge, who decided to take matters into his own hands after he learned his wife was having an affair with the unfortunate Major. In spite of his misdemeanours (he was acquitted on grounds of justifiable homicide), Muybridge became famous for his pioneering photography and inventing the zoopraxiscope (a fantastical-sounding device if ever there was one). He is also one of the many characters that populate Brian Catling’s complex and sprawling fantasy, The Vorrh.

Muybridge’s historical life sits alongside those of other characters both real and imagined, their stories interwoven with a Borgesian deftness. Catling writes Muybridge almost biographically, whilst other characters draw from more personal obsessions. Ishmael, a Cyclops, steps neatly from the author’s exhibitions of fine art, where he is a recurring creative theme. Ishmael, reared by plastic automatons in the cellar of an old house, has no knowledge of the outside world until one day he is taken out into the city. Here he begins a quest of exploration and self-discovery, driven by a fierce sexual hunger. Tsungali is a hunter in possession of a powerful rifle, etched with runes that betray – or contain – its simmering ferocity. He is tasked with tracking the Bowman, who, relieved from his memory, is led only by the arrows let fly from his sentient bow. This weapon is constructed from the body parts of a recently deceased seer, an event that makes up the novel’s striking opening sequence.

Catling introduces these characters piecemeal, and it is some time before we fully understand who they are and where they are heading. Most journey through and around the symbolic vortex at the heart of the novel, the great jungle of the Vorrh itself. A vast rainforest set somewhere in Africa, the Vorrh takes the fairy-tale device of the Wood and stretches it through sublime dimensions, rendering its vastness comprehensible only through myth. Those who hope to penetrate the centre must take the old logging train, sleeping through the passage of its boundaries as the forest permits no waking consciousness to trespass. Those who linger here become soul-less, self-less beings, their identity drained by the insatiable mass of the original forest.

The jungle is in fact the creation of Raymond Roussel, French surrealist poet, and first featured in his 1910 novel, Impressions of Africa. In a strange yet brilliant reversal Roussel himself appears in Catling’s novel, charting a fictionalised venture into the heart of the rainforest. Here the creator enters his creation, but on Catling’s terms: robbed of authorial distance, Roussel is at the mercy of the very place he helped bring to life. 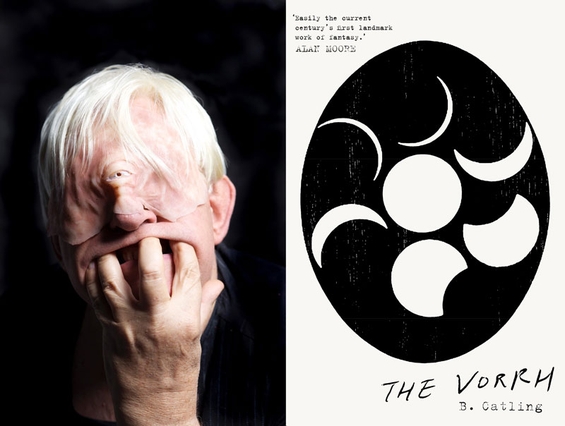 This rich tapestry of fact and fiction, fantasy and reality, makes for an engrossing and rewarding read. The unsettling appearances of the supernatural become more so as they cross from story to biography and back again, bleeding across perspectives without discrimination. Even Muybridge, written with close attention to real life, is not safe from the predations of the weird. It is these junctures of the uncanny that is the novel’s greatest success, helped along by Catling’s lurid use of language. Some may find his imagery pretentious, and at times it can seem needlessly opaque, but the poetic quality of his writing sets an ambiguous, ethereal tone that helps lubricate the instances of the fantastical, giving them a power that resonates from the page. Where Catling slips from this style it is to bring a more robust prose that relates the nuts and bolts of the story. The effect of this isn’t always well-handled, to the point of being quite jarring, but is forgivable given how well-conceived everything else is.

There’s plenty of density in this lengthy epic, especially to begin with. The many different stories overlaid with one another can be hard to keep up with, and not all of them seem to go somewhere. As this is the first of a promised trilogy, however, some judgement should be reserved. There are no structured chapters here, and points-of-view come and go with an off-beat pacing, some storylines disappearing to give other characters prominence, only to resurface later on. This can make things feel more like a short story collection at times, with narratives focussed into themed sequences. This can be very successful, especially one part that tells the spectacularly creepy story of the effect of the Vorrh on a stillborn child. Elsewhere this structure can be more frustrating, but stick with it and slowly the disparate threads begin to converge, with many memorable and eye-opening events along the way. What these meandering storylines and linguistic entanglements suggest is that another character has entered the forest: us, the reader. We are navigating a novel wrought from the same stuff of the Vorrh, treading its overgrown pathways and enacting its own metaphor of narrative.

Catling’s novel is a kaleidoscopic exposition of speculative literature, shorn of clichés, boldly and artistically charting the deeper recesses of the fantastical. Perhaps more than anything The Vorrh is a writer’s novel. It shows us exactly what is achievable in the genre when viewed with a fresh mind, unfettered from traditional tropes and conventions. Catling’s tapestry draws from many disparate elements – biography, pastiche, surrealism, horror – and threads it all with a lyricism that brings a startling intensity to its evocation of the weird. The novel contains much that will inspire both writer and reader to demand more from the genre, providing one is bold enough to enter its sprawling domain. It’s a worthwhile endeavour, but be warned: no one returns the same as when they went in…

And edition of this article first appeared at Fantasy Faction on 12th September, 2014.