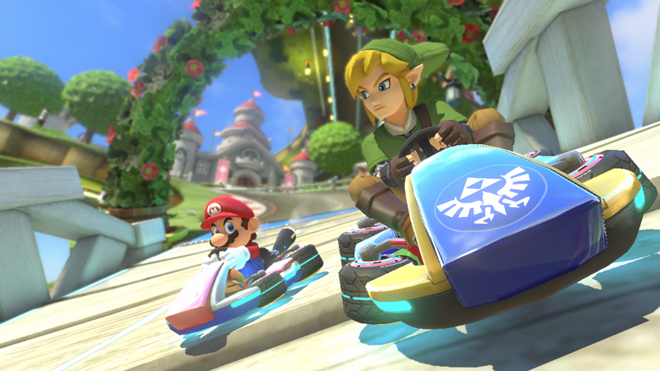 It seems almost cruel to cast an overly critical eye on Mario Kart 8. After attracting headlines for plenty of wrong reasons, Mario Kart 8’s arrival is, for Nintendo, like the triumphal fanfare of Tywin Lannister relieving King’s Landing from the siege at the Blackwater. Finally some good news: 1.2 million copies sold over the first weekend. Critical acclaim. Boosted Wii U sales. Luigi’s Death Stare. But, much like the Lannister overlord himself, for all of Mario Kart 8’s shining optimism, there is a sinister undercurrent of plot and intrigue.

What the Mario Kart establishment seems to have become is something of a gaming trope meat grinder: what might be fresh for the series is stale for Nintendo. The anti-gravity feature is an obvious draw from the F-Zero titles, with some of the later levels – especially Rainbow Road and Electrodome, with their glowing neon track details – apparently ripped straight from the F-Zero sourcebook. Even the electric guitar that complements the traditional jazz of the Mario Kart 8 theme seems lifted from F-Zero X’s world of glam-rock racing.

The sad thing is that F-Zero is a franchise we are unlikely to see revived on the Wii U or the 3DS, or maybe even ever again. Miyamoto himself has made it clear that the venerable franchise has no place in the company’s current strategy for games and gaming. 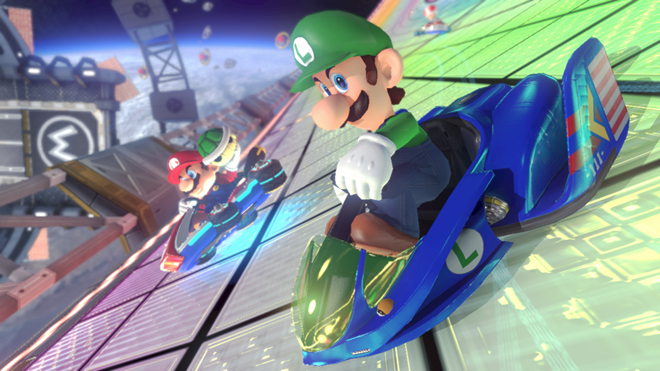 F-Zero is not the only grafting on the Mario Kart 8 chimera. The bikes, first introduced in Mario Kart Wii, now seem the only way to emulate the glory days of Excitebike. Even 1080 Snowboarding appears stripped of autonomy and rammed into Mario dungarees in the form of Wario Mountain, which sees you swerve down a snowy mountain in a single run, jumping the logs you might once have grinded along.

Not that any of these elements are to Mario Kart’s detriment. Far from it, they do a wonderful job of extending the palette and texture that has always been the series’ strength: a cacophony of influences pulled from all over the Mushroom Kingdom, distilled into its signature kart-based mayhem. Perhaps it is merely a logical step for Mario Kart to extend its reach into other gaming realms apart from its own.

There is still a certain tragedy at work for anyone who fondly remembers tearing around long, jarringly bright loop-de-loops, and where anti-gravity spins were aggressive tools of assertion rather than co-operative speed boosts. The vertiginous splendour of F-Zero seems consigned to a nostalgic footnote in the likes of Smash Bros., Nintendo Land, or the Virtual Console.

F-Zero, Excitebike, 1080 Snowboarding, even Pilot Wings and Wave Race to a small extent: Mario Kart’s smash and grab looting of these franchise’s hallmarks have rendered them sadly obsolete in Nintendo’s eyes. It seems this fire sale of Nintendo’s ‘other’ franchises is all to the greater glory of its core titles: Go Mario or Go Home, appears to be the running trend. What next? Can we expect Metroid phased into Zelda? Probably not, but at the moment anything seems fair game for Nintendo – desperate times and all that.