This article refers to news from the Electronic Entertainment Expo (E3) held in Los Angeles in June 2014.

Fantasy has always been a salient feature in the videogame landscape, right down to the essential footprint of guiding an idealised persona through an imagined world. The hallmarks of fantasy – high fantasy especially – have become a reliable foundation for a great many titles over the years, and there are no signs of it losing its appeal. With powerful new consoles raising the processing standard, the limits in scope for scale and detail are pushed ever further, allowing – at least in presentation – for more immersive and believable environs. This year’s Electronic Entertainment Expo (E3 to all initiated) showcased a particularly strong line-up of upcoming fantasy-inspired games; from ubiquitous grimdark brood-fests to stylised rural foppery, there’s plenty to look forward to over the next couple of years. 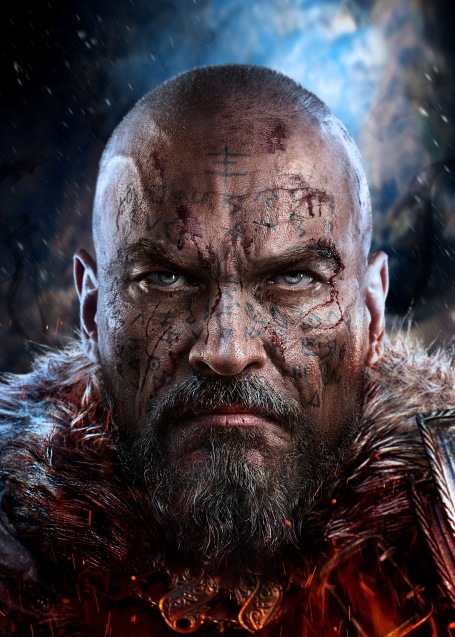 Lords of the Fallen (PS4/Xbox One/PC)

The backstory to this title is fairly interesting: a dark god and his demonic legions are overthrown by a human civilisation, and through this act the humans develop the hubris that all evil can be controlled. Any person who sins is branded with a mark of that sin, forced to carry the identity of their stain within society. Our anti-hero, a heavily branded veteran of wrong-doing, is released from jail to turn his expertise against a new incursion of demons. This is principally an excuse for much action-RPG brawling, deliberately riffing on Dark Souls’ notorious – yet wildly popular – level of difficulty. What was shown of the combat was fluid, satisfying and, as the developers repeatedly like ramming home, hard. It’s a shame in a way that this is billed as primarily a trial-by-combat patience-tester, as a more fleshed-out RPG could have explored the back story with a level of depth and immersion that may otherwise be overlooked. The art direction is predictably grimdark but with a slightly stylised angle, reminiscent of Warhammer tabletop games: bulky pauldrons, priest-like attire, and fiery red demons dominate. Everything looks great, even at this early stage, but it remains to be seen if it will ever be more than a Dark Souls derivative, or if it can become something more compellingly its own.

The Legend of Zelda (Wii U)

The venerable franchise from Nintendo returns to its roots with full open world gameplay, doing away with the structured dungeon quest that defined previous games. Not much was revealed, not even a title, but it looks to develop on the innovations of the latest instalment, A Link Between Worlds, which allowed players to rent key items and then tackle dungeons in whichever order they chose. The game’s director promised a non-linear structure, taking inspiration from the original Legend of Zelda that privileged player-led choices and progression through exploration. What we did see of the game was a mature update to The Wind Waker’s cel-shaded graphical style, which showcased lush, far-reaching landscapes, vibrant lighting, and lively effects. Gamers used to the open worlds of the Elder Scrolls may respond to this new direction with little more than a shrug, but Nintendo have always found a way to leave their own unique signature, and if nothing else, the company’s fierce quality control should make for a far less buggy experience. 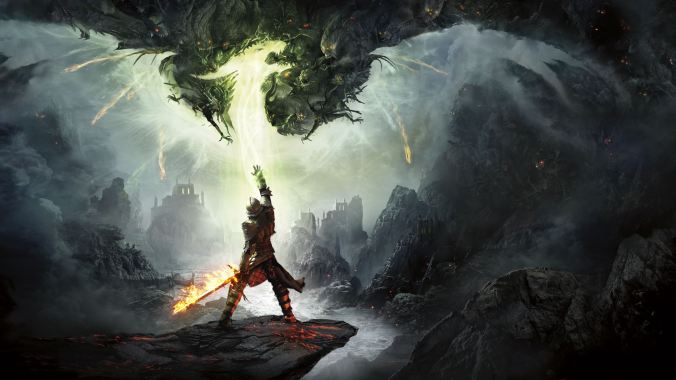 There’s a distinct whiff of ambition surrounding Bioware’s third entry in the Dragon Age series, which seems to be learning hard from the lessons of previous games. Your questing party is made up of the usual fantasy characters, who you can switch between during combat. A generous control system allows for both third-person action and a top-down perspective, where you can relinquish direct control to issue orders from afar. This should bring some tactical depth to the battle system, allowing you to adopt the best approach for a given situation, switching between characters and perspectives on the fly. The story conforms to the current trend of demonic incursions (the warp is busy this year), with the added inconvenience of a civil war to contend with. You, as leader of the titular Inquisition, must build and spread your influence across the land to manage both the diabolic threat and the warring factions. The importance of influence is the most interesting aspect to this game: as well as affecting the plot, your actions can shape societies and ecosystems, so that burned villages and hunted beasts will impact their respective environments, to the point where even narrative possibilities may disappear for good. This looks set to bring the franchise to an all-new level of immersion, and offers a worthy challenge to the likes of Skyrim.

The Fable franchise experienced something of a fall from grace in its last title, but this newest instalment is bent on reclaiming the glory of its early days. The flintlock fantasy of the latest games has been ditched in favour of a return to the high fantasy of the original. This is more than evident in the delightfully exuberant settings: quirky multi-layered towns and elaborately trimmed hedgerows succeed in bringing a fantasy element to the environments themselves – something eschewed by many of the more realistic treatments of the genre. Other than that, the game is something of a departure from previous entries, being mainly a dungeon-crawler with an emphasis on multiplayer. What’s compelling is how unrestrictive the multiplayer is: players can drop in and out of games, choose to join the party of adventurers or even become the villainous overlord, setting traps and deploying minions to hinder the party’s progress. Still intact is the series’ signature sense of humour and expressive characters. What’s excellent to see is how the traditional fantasy archetypes are subverted: the burly sword-and-board brawler is female, for example, whilst the usually scantily-clad archer is a grim, fully-clothed male toting a crossbow. The developers have promised at least half of the characters will be female, a welcome move to diversify the typical line-up of dungeon questers. 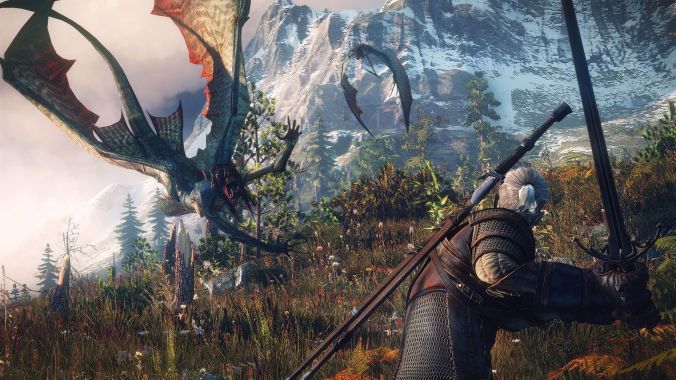 Closing the Witcher trilogy of RPGs – based on Andrzej Sapkowski’s popular fantasy novels – is this sublimely epic beauty. It promises to be one of the first big attempts at open world fantasy on high-end platforms, and it’s quite the looker. Even the resolutely grimdark vibe can’t spoil the sumptuous variety of landscapes – dusky evergreen forests, snow-sprawled glaciers, sun-bleached pasture – and it’s all rendered with the type of clarity and detail that has always been somewhat lacking in realistic RPGs. Finally we can explore a world where trees actually look like trees rather than imitations cut from cardboard. Story-wise it’s fairly bland – a brooding protagonist is the only hope against the predations of a hulking, black-plated warlord with a penchant for burning villages. Still, the developers promise a story that reacts and adapts to the player’s choices, so hopefully the narrative will prove more enthralling than the template premise would suggest. The eponymous witcher possesses a particular brand of extra-sensory skills, enabling him to track, stalk and massacre the local wildlife. They’re well-implemented, and the creatures themselves show some imaginative flair in their design, even if they’re largely there to be culled. Polish folklore and literature are channelled through a talented Polish game studio (alongside a Polish folk soundtrack) to bring about a climactic end to a much-loved series.

An edition of this article first appeared at Fantasy Faction on 30th July 2014.