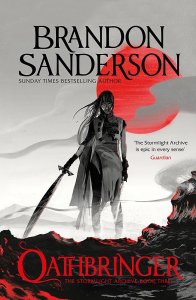 A lengthy novel deserves a lengthy review, does it not?

Oathbringer picks up from the apocalyptic cliffhanger ending of Words of Radiance. I was all set for a race-against-time narrative as the newly-fledged Knights Radiant attempt to save as many of the cities of Roshar as possible in the face of the encroaching Everstorm, and fully expected Oathbringer to go over these events in detail – covering only a few weeks in timespan.

Turns out this was wildly off the mark – the Everstorm, whilst destructive, is not nearly as powerful as it is expected to be, and the apocalyptic build-up to its arrival has stemmed largely from myth. Instead we see its (still devastating) consequences and its transformation of the enslaved parshmen into voidbringers – again, this is not the apocalyptic war expected, but a slow-burner. These ‘voidbringers’ are not the demons foretold in Alethi legend but awakened parshmen, now as cognisant and lucid as humans. This is just the beginning of the overarching theme of Oathbringer, which is essentially about the self-realisation of Alethkar: their myths are wrong, their culture is cruel, and their identity is deeply flawed.

It’s refreshing and fascinating to see the process of Alethkar’s slow self-realisation, as shown principally through Dalinar’s character development, whose arc reflects what is happening to Alethkar on a different scale. With the nation being overrun, the Alethi protagonists are having to take a long hard look at themselves and what their nation and their culture stands for. They’ve realised a species not far distant from themselves, enslaved to better their own culture, has now achieved enlightenment to rebel, and seek destructive vengeance – and they are entitled to do this. They’ve realised the technologies they have created to serve them do so at the expense of the liberty of spren – their progress is built on cruelty. They’ve realised that the bordering cultures and nations – long looked down upon from an Alethi cultural viewpoint – are now essential not just to the unification of Roshar, but to the survival of the Alethi themselves. Their country is overrun, and they have no-one else to turn to.

It’s a fascinating process of self-realisation that very successfully drives the development of the plot and overall tone of the novel. Sanderson’s novels are very long – overly so sometimes – but what that length achieves is a sense of progression, of things at scale moving ponderously into place that would be hard to achieve at shorter lengths.

Often the epic fantasy plotline tends to gravitate towards one of two templates – either the defence of the status quo from an external threat, thus preserving the protagonist’s worldview, or an attack upon the status quo from the perspective of the underdog, thus displacing the position of power with the protagonist’s worldview. Oathbringer is interesting because it does neither: instead, the status quo is seen from a position of power that itself needs to change – the onus is then on the characters to develop in a way that allows this internal change to take place, and in so doing, the perspective they have of the external threat also changes.

Sanderson is exceptionally good at this grand, sweeping narrative, tying in character development with overarching themes, and always to stunning effect. Where he falls down is in his functional prose, and an unwillingness to engage with character conflict. Some may appreciate the explanations behind his worldbuilding, but I’m more forgiving and would rather they were kept to a minimum, as it adds needless drag to an already massive narrative. It’s difficult to fear for his protagonists’ lives when their abilities mean they can heal from even the most grievous of wounds without the smallest of emotional consequences (at one point someone gets shot in the head by a crossbow bolt at short range and there is no mention of any pain or post-trauma…). A lot of people die, and many of these deaths are given little more than a footnote. Granted, this is part of showing the flaws in the warlike Alethi culture (in Dalinar’s case, quite obviously), but the sheer lack of empathy shown by some of the protagonists in the face of so many people dying really sticks out at times.

It’s clear that much of the action and character interaction is informed by anime, so while certain scenes make little sense when imagined realistically – as an anime, they make all the ‘sense’ of a show with that format’s typical idiosyncrasies would. This is not necessarily a huge flaw, (certainly the action sequences benefit hugely) but I did find myself at times wishing Sanderson had made a few more edits to revise down this over-the-top influence to something more fitting for the novel format.

I appreciate a fantasy novel can pick and choose any sort of cultural idiom it pleases, but I found the occasional modern turn of phrase jarring in a supposedly medievalist (or near enough) fantasy setting – characters saying ‘hey’ to one another shattered my immersion far more than chasmfiends being beyond the laws of physics.

Still, these are flaws I’m happy either to overlook or give the benefit of the doubt, as, by now, Sanderson has made abundantly clear he has a firm grasp on the overarching narrative and how the events unfolding at scale tie in with the progress of his characters. There are plenty of unknowns still lurking beneath the surface, and much more to be revealed later in this (staggering to think about) ten-book series.

I found Oathbringer a step up from Words of Radiance, and whilst not quite hitting the dizzying heights of The Way of Kings, it was by far enough to warrant a fifth star.