British writer Kazuo Ishiguro is widely celebrated for his literary fiction, including the Man Booker Prize-winning Remains of the Day (1989), and more recently his sci-fi sampling Never Let Me Go (2005), which saw a film adaptation by Mark Romanek in 2010. Ten years after his last novel, The Buried Giant (2015) saw Ishiguro once more returning to speculative realms, this time with his first foray into the fantastical. Its arrival was not a quiet addition to the genre.

Ursula Le Guin was vocal in her criticism of Ishiguro’s supposedly superficial handling of fantasy tropes, especially after he expressed concerns over the fantasy elements and whether his usual readers would be put off by them. Le Guin was quick to call out what she interpreted as an unwelcome attachment to the genre: “no writer can successfully use the surface elements of a literary genre – far less its profound capacities – for a serious purpose, while despising it to the point of fearing identification with it.”

This largely arose from a long-suffered back-and-forth of genre snobbery afflicting the industry – something the fantasy community has had to put up with for a long time – and Le Guin is no doubt right to be suspicious of anything that resembles it. Ishiguro later clarified his position, explaining how the fantasy elements in The Buried Giant were vital to creating a setting within which he could frame a “metaphorical landscape” to explore his ongoing theme on the nature of collective memory.

It’s interesting to see how entrenched these notions of genre and reader expectations can be – certainly Ishiguro wasn’t expecting the wasp’s nest he had stepped on by utilising fantasy tropes as a perceived literary author. In doing so he drew fire from both sides: reviewers used to his literary fiction were baffled by this turn as much as Le Guin hated it (she later went on to amend her initial criticism as an “over-hasty response,” although remained unsympathetic toward the book itself). Certainly, the clamour over what genre The Buried Giant belonged to directed attention away from the more interesting question of why it was in that genre in the first place.

Neil Gaiman, who wasn’t a fan of the book but had nothing stingy to remark about it, went on to have a fascinating discussion with Ishiguro about the nature of genre, reader expectations, and the use of tropes. Specifically mentioned were the fight scenes of The Buried Giant, which have remarkably tense build-ups, but somewhat abrupt resolutions; Gaiman comments: “this is not how a reader of fantasy expecting a good swordfight would have expected this swordfight to go.” Ishiguro brings his own traditions of genre to the table – his fight scenes draw from samurai and western films, he says, where the duel often unfolds psychologically beforehand, through dialogue, before a single bullet or sword slash reveals who was the most skilled. These scenes make for some of the novel’s best moments, as each line of dialogue is exchanged with murderous intent. 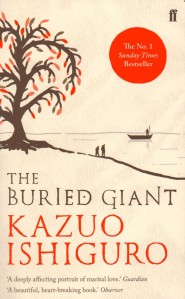 However, it is Ishiguro’s subtle layering and blurring of his metaphorical setting that proves to be his most successful formation of fantasy. Axl and Beatrice, two elderly Britons, are afflicted by a strange defect of memory, which has swallowed events from their past in a shifting fog. It affects not only themselves and their village, but also the shared history of their country. The couple remember dimly they have a son who had moved to another village, and set off to find him. On their way they meet a variety of characters, face tests to their relationship, and learn unwelcome revelations as the fog obscuring their past slowly recedes.

The era that this is set in – after the Romans left Britain but before Saxon rule became the norm – is a muddled one in historical accounts, and well-suited to exploring through imaginative fiction. The fog that spreads across the land signifies the gaps in our own historical knowledge as much as it hides the sins of the characters in the story. Ishiguro’s handling of this device is subtle, sometimes cold, to the point of it almost lacking the mystery is should clearly resonate with. Part of the problem here is the language used, which proceeds as a kind of faux-Arthurian formalism that fails to engage or evoke, and often leads to some really stilted dialogue that should be anything but.

While the opaqueness of the language can at times be frustrating, it nevertheless provides a cloak under which the narrative can metamorphose – realism skips into metaphor and back again with nary an expository clue. Moments like these can be quite arresting, and ultimately unsettling, as the very nature of the narrative comes into question, before fading inconclusively back into the fog. The way the setting’s fantastical nature bleeds into the novel’s very structure shows just how malleable the genre can be.

The title ‘The Buried Giant’ evokes the spectral nature of Britain’s past, linking the uncanniness of the landscape to the suppressed histories of its people. The cramped historical strata disinters itself through a landscape of vestigial topographies – mounds, ruins, monoliths – that hint at a past we can often only speculate at. Ishiguro’s novel does not probe this too deeply – rather it is acutely aware that some ghosts should be left undisturbed, some monsters left to roam. Its peeling back of historical layers is only to show glimpses of things once known, to announce a landmark, an event, a question, before letting it submerge again, unresolved. Despite the often flat imagery, it is these suggestions of a revenant past that continue to haunt long after the story has ended.

The Buried Giant is a novel content to shroud itself in obfuscation, to the point where questions as to its genre become mostly unhelpful, even irrelevant. Through this ambiguity, the narrative flits through fantasy, historical realism, fable, and legend. Ishiguro’s novel is a hard book to get along with, let alone fall in love with, but it undoubtedly lingers long in the mind after the fact. I would recommend it to a writer of fantasy as its examples of metaphor and structure are excellent – but for readers of fantasy I would advise caution in the first instance.

If you’re willing to overlook the superficial fluff of incidental monsters and tedious dialogue, you might be pleasantly surprised to discover the novel’s well-hidden treasures glimmering from their sunken nooks. The murkiness of the narration, whilst perfectly fitting the setting and theme, does its best to keep these treasures out of reach. They’re definitely there, but it takes a bit of wandering in the fog to find them.

An edition of this article first appeared at Fantasy Faction on January 14, 2016.