SPOILER WARNING: Contains plot spoilers for Zelda: The Wind Waker and Zelda: Twilight Princess. Although if you haven’t played these by now, WHAT THE HELL.

It’s 2003. A young, wide-eyed Link ascends into a shipwreck penthouse atop a crooked tower. Ahead of him stands a dark, perplexingly fat figure, as misshapen as his home, and arguably The Wind Waker’s finest achievement.

Ganondorf appears significantly – almost shockingly – altered from the powerfully-built, greatsword-wielding demon first shown in the 2000 Space World demo that teased the GameCube’s potential. Instead we are introduced to a gnomish, flabby, kimono-dressed recluse, yet probably Nintendo’s most convincing iteration of the antagonist to date.

Here an aged despot clutches selfishly to his sigil of power, no longer enjoying the potency of dominion, resigned to living out his endless days in a bleak, sea-sprayed fortress (a ramshackle state of affairs at that), brooding on past glories and defeats – events that now only he remembers or cares for. His bitterness against the world runs deep, even dispatching agents to kidnap children that – through mere resemblance to his scarred, obsessive memories – his psychosis has convinced him to believe offer him harm.

Contrast this weakened, twisted tyrant to the godlike appearance of Ganon in Twilight Princess (2006), who – along with much of the cast, it must be said – is as bland a non-character as the Zelda series has ever brought to screen. 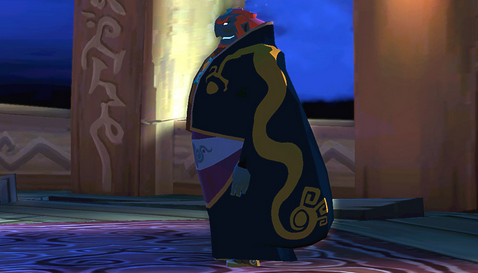 Ganondorf’s earlier appearance in The Wind Waker helps build the antagonism that resonates through the storyline. His nefarious activities lend him a palpable aura of evil, whilst his flaws save him from becoming the pantomime villain he often appears as elsewhere. It is this flawed humanity glimpsed beneath the cracked mask of villainy that asks us to re-appraise the schemer we thought we knew, and slew, many times before. This is a King of the Gerudos who has let himself go, with no place in the present, no ambition for the future; his powers, his ambitions, his worldview, are all shackled to the past.

Is it not too hard to see the image of the loyalist fan in this Ganondorf, Nintendo’s mirror to the hardcore gamer? The Wind Waker’s antagonist represents every Nintendo fan who formed the loyal core up to this point in the company’s history. Ganondorf, the veteran gamer, dreams of an older Hyrule, one lost beneath a sea-change that, at the time of The Wind Waker’s release, was beginning to shift Nintendo’s entire vision of gaming, games, and who should play them.

The Wii heralded the arrival of this new vision in 2006, but its roots can be seen during the GameCube era, where perceived ‘hardcore’ franchises – such as StarFox, Metroid, and F-Zero – were exiled to external developers, whilst the big names of Mario and Zelda underwent a process of metamorphosis into the more friendly, pick-up-and-play style the Wii consoles have become famous for.

Toon Link, as he was known and derided following his 2001 Space World debut, put a face to this transition, an initially hated vanguard of this ‘nu-tendo’ that was not to fully arrive until years later with the casual-friendly Wii. Set against this new wave Link is the old-school gamer portrayed by Ganon who paints a convincing picture of any old-hand of Nintendo gaming suspicious of the company’s shift in strategy. Locked in their mental fortress, they care little for the vast and shallow sea of casual motion gaming that surrounds them, convinced Nintendo’s ‘golden age’ has been and gone, preserving their sepia-tinted memories within a time-frozen bubble, and drawing upon such stock to judge anything new or different that might come along.

It should be no surprise that, rather than his hulking greatsword, Ganon draws two nimble katanas, and we fight a Ganondorf not lacking in martial skill, but in his dextrous prime. He blocks, leaps and parries with the sort of well-honed reactions any self-respecting hardcore gamer will have developed over the years.

If Ganondorf represents every loyalist Nintendo fan, and old Hyrule as the games they set the standard by, then Nintendo’s judgement is clear: the deluge that floods old Hyrule during The Wind Waker’s climactic sequence was never meant to be reversed; Hyrule could never be raised again. With the coming of the Wii, Nintendo was turning its back on its illustrious past: the scene had been reset. In a mean twist, Nintendo put the executioner’s axe into the hands of the gamer themselves. As Toon Link, the harbinger of this new age, we have little choice but to put an end to the avatar of the old-school. Needless to say, without the Triforce of Power, Ganondorf dies.

The curious anomaly to this trend, the ironic postscript, is that, in a way, Ganondorf did win that battle: Hyrule was restored. Twilight Princess, in spite of its drab exterior, was a return to the pixellated epic of old Nintendo. Essentially Ocarina of Time Plus, Twilight Princess provided some of the most memorable boss fights and rigorously-designed dungeons the series has ever showcased.

But if anything, the shoehorned Wii version showed just how inappropriate such a design ethic felt within this new generation. Rather like Ganon’s ramshackle redoubt on the Great Sea, the brooding cover art of Twilight Princess appeared incongruous amongst the squeaky shiny delights of Wii Sports and friends. This was a gesture from Nintendo, a sinking lure, to bring as many as possible from the old to the new: come with us.

When Ganondorf arrives at the end of Twilight Princess, as if straight from the 2000 Space World demo all those years ago – and we banish him back just as quickly – do we really care? The future is already here, and we suspect that of the game’s dual-world mechanic the reverse might be true: it is the Twilight Realm that is real, this rebuilt Hyrule is mere, invasive illusion. We fight as an old, scarred wolf for its preservation, but in vain. Such a world is only a dream of one.

A decade since The Wind Waker first hit consoles, the present finds Nintendo a company still haunted by its past. Its courting of the vast but shallow casual market proved a fickle affair; its lesson from the Wii was that it still needed the loyalist core to turn things around when times got hard. Despite their efforts, then, old Hyrule refuses to fade. The Wii U (2012) is an ambitious amendment to Nintendo’s strategy that attempts to reconcile the two powerful forces competing for the company’s attention: the capricious demands of new, casual gamers, versus the entrenched expectations of the loyalist user base. This dichotomy resulted in a bizarre chimera of the Wii’s multiplayer accessibility and the single-player immersion of a tablet controller. But the Wii U compromise does not appear to be working.

As questions are raised concerning Nintendo’s relevance in the present era of gaming, it is fitting that they should return to the gaming metaphor that, with hindsight, signalled their strategic transformation in the first place. The Wind Waker HD debuted with a packaged figurine of the same Ganondorf who was last seen petrifying as a statue beneath the waves. As if risen from the sea, scrubbed up, and redeployed at Nintendo’s behest, they have perhaps realised that Wisdom and Courage alone are not quite enough to make a console: Power is also a requisite, and the reliable source of power offered by the hardcore fanbase is one yet to run its course. The Wind Waker’s debut on the Wii U brings to attention a new crossroads in Nintendo’s history: where now, and who with?