The House of Terror is a grim yet fascinating witness to the victims of Budapest’s two terror regimes from the last century. Identifiable by its striking black borders, the very building that was once home to the perversions of ideological extremes is now a commemoration to its victims. Now in its tenth year since opening its doors to the public, the balance struck between memorial and museum makes for a conceptually flawed if beguiling experience.

As headquarters for the Arrow Cross Fascists and the Soviet AVO secret police that replaced them, 60 Andrassy Avenue bears a haunted past. Each room of the museum that now frequents the building has been conceived as a stylish installation, from a Soviet tank hulking by the entrance to the many faces of the regimes’ victims staring out from the elevator walls. The messages are boldly communicated, if not always so effectively. The building is somewhat awkward in its layout, asking visitors to move from top to bottom, with a confused chronological progression to the rooms and scant information in places. For English-speakers this can prove especially frustrating, as an accompanying sheet of text is sometimes the only English explanation available, and often not enough. 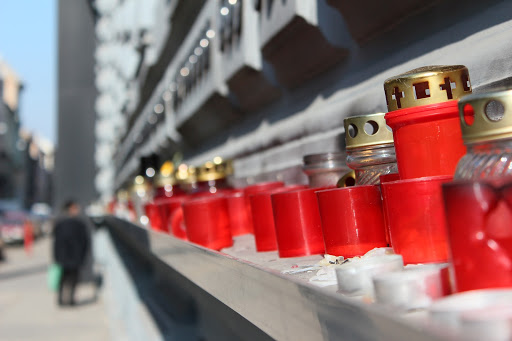 The installations that convey the message of each room bear some resemblance to the Franz Kafka museum in Prague, although lacking in its eloquence. Whereas the Kafka museum succeeds in conjuring a sense of tragic creative endeavour versus the banality of modern life, the House of Terror stumbles through its own story with rather less panache. Some rooms appear tailored more towards visual impact than the effective imparting of information, and one is left with the impression that certain areas of its history have been denied a more thorough exposure in favour of eye-catching but vapid showcases. Focus is largely centred on the atrocities committed under the Soviet regime, with only a little space dedicated to the Hungarian Fascists of the Arrow Cross that preceded it. This is a shame, as such an important topic surely deserves a fairer treatment.

As a concept, the House can’t seem to make up its mind about what it wants to be, switching every few paces from museum to memorial, through art exhibition to house of horrors. This awkward identity crisis lets in a few kitsch elements that cheapen the House’s nature as a memorial. Does it matter? Probably. The sheer number of votive candles lining the walls outside is enough to remind us of the reality of what the House commemorates, so its design should exercise proportionate taste in examining its past. Unfortunately, this is where the main problem lies. The sinister music that plays upon entering the house and later on in the museum certainly builds atmosphere, but is any of it really necessary when this is, after all, the very same place where all these atrocities occurred? That fact alone should be enough to set the tone, without the need for hyperbolic strings in the background. The slow descent of the lift towards the basement and the ‘reconstructed’ cells we find there smack slightly of bloody dungeons and ghost trains. Do we need the artificial excess of ambient lighting, ‘dirty’ floors and fake rainwater to appreciate the profundity of the setting? The designers, it would appear, think we do.

And perhaps they have a point, to an extent. This theatricality, built to stimulate many senses rather than just one or two, allows an immersive accessibility for a younger generation more in thrall with reconstructed realities. It is the younger generations that will benefit most from this type of museum, so perhaps it is right to cater towards their needs. It’s just a shame that the House of Terror must become a parody of itself – an exercise in cheap fairground thrills – in order to tell its genuinely haunting tales. Separating the memorial aspect from the museum may have been a more respectful and simpler solution. As it is, the building proclaiming ‘TERROR’ along its roof wears the portraits of its victims with a sort of morbidly shameless glamour: I did this, it says, look upon me and tremble. Sadly, this gratuitous need for hyperrealism is symptomatic of Western culture in general: a house of terror must look terrifying, independent of what makes it terrifying.

In spite of its shortcomings, the House of Terror is still very much worthy of a visit for anyone requiring a more historical tonic to their Budapest experience. Overlook its conceptual inconsistencies and blotchily-placed history and there is much of interest to be found. Not least are the video interviews with those victims of the atrocities who lived to tell the tale. The room listing the names of the victims, followed by a room listing the names of the oppressors – many with dates of death left blank – gives some long pause for thought. At the end of such a bleak tour it would have been nice if the museum ended on a more conclusive, if not optimistic, note, but the minimalist videos of Soviet troops waving goodbye in the final room fall sadly short of providing any great sense of closure. Is this history considered too recent to justify expanding upon? Detailing the end of the Soviet regime in Budapest would have at least provided a more complete picture.

Amongst the Guccis and Armanis of Andrassy Avenue, number 60, with its harsh black borders and symbols of terror writ across the sky, boldly marks itself out as something different. Unfortunately, it seems undecided as to just what that is. Anyone wanting to experience what it has to offer will undoubtedly leave disturbed, just not necessarily for all the right reasons.

An edition of this article first appeared at 4QPlus.com on October 17th 2012.