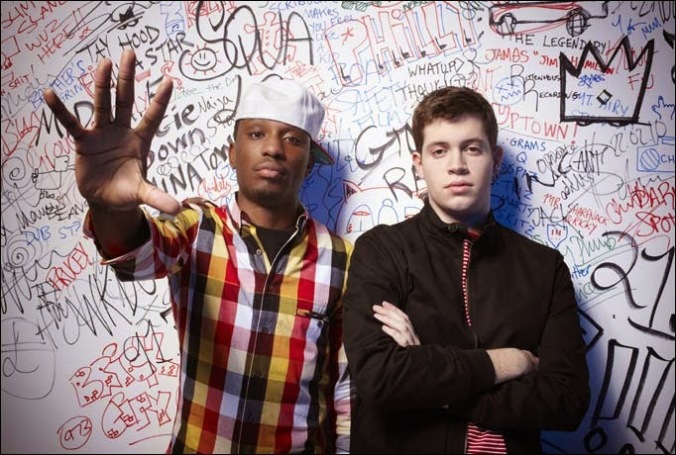 Chiddy Bang, comprising Chidera ‘Chiddy’ Anamege and Noah ‘Xaphoon Jones’ Beresin, are in a pretty upbeat mood, and they have every right to be. Describing themselves as “hip-hop for today’s ADD generation,” the group have ridden a wave of popularity that has seen them go from mere start-ups in 2009 to releasing their debut album ‘Breakfast’ in March of this year, selling 31,000 copies during its first week on sale in the US. So what magic took place in-between? In a word: the Internet (all right then, two words).

The phrase ‘gone viral,’ oft-used to the point of gagging cliche, seems entirely appropriate in the case of the Philadelphia hip-hop duo. In the early days of 2009, when gigging at US universities, the group would often play to packed-out venues, their arrival pre-empted by John the Baptist style evangelising within student circles. Says Xaphoon: “universities all across America are little bubbles for sharing new music […] we were nothing, but we would go to Middlebury [College] in Vermont, and because everyone there had just shared the music with each other, they all knew the words. We played for 600 kids, and 600 kids were singing every word to every song.”

Such a significant early response does not come easily, of course. Getting to that envious position of online eminence was a task in itself. Using the music blog aggregator Hypemachine, Xaphoon recounts how he would scour the site for blogs making consistently popular posts, before making speculative submissions of the group’s own work: “[we would submit to] a couple hundred blogs, and out of those couple hundred blogs, maybe twenty would listen to it, maybe five would post it.” But Chiddy Bang’s success is testament to nothing if not persistence, and the bushfire spread of the group’s popularity across campuses everywhere was an indication of things to come: “from those five, everything just started.”

In October 2009 Chiddy Bang released their first free downloadable mixtape, ‘Swelly Express.’ Telling the story of the group’s musical journey so far, Xaphoon was hopeful of the release’s success: “we expected to get 10,000 to 20,000 downloads if we were lucky.” Instead, the response was phenomenal: “we ended up getting 100,000 in the first month!” enthuses Chiddy. Their success did not go unnoticed. Having initially declined label interest in the US, Chiddy Bang signed with Parlephone Records in the UK and in February 2010 their first UK single, ‘Opposite of Adults,’ hit the mainstream like a small bomb.

Given the classic nature of the MGMT source material (‘Kids,’ 2008), the group were keen not to come across as too serious: “that could have ended us,” expands Xaphoon, “people could have just torn us apart. Taking one of the biggest songs of all time, stuttering it out and rapping over it…” Fortunately, no such musical faux pas came to pass and ‘Opposite of Adults’ entered the UK Singles Chart at no. 12. “It wasn’t top 10 but it was so fucking close.” That precious top 10 entry was achieved in the Australian Singles Chart when it peaked at no. 10. In fact, Australia appears to be Chiddy Bang’s prime territory for success: “we’ve gone platinum […] we outsold Tinie [Tempah] by 150,000 records.” That particular achievement is still hard to grasp, highlighting the relative disparity between territories: “culture is strange,” muses Xaphoon.

And the UK? How has that been? “Amazing,” “fun,” they both agree. Having toured various UK cities with Tinie Tempah in 2010, Chiddy Bang appear quite at home on British soil. Indeed, ‘Air Swell,’ the duo’s mini-mixtape follow-up, draws heavily from UK artists for inspiration, sampling the likes of Ellie Goulding, Kate Nash, Gorillaz, and Hot Chip: “we were listening to so much UK stuff.” This year the duo have appeared at a number of major venues up and down the UK as part of their current worldwide tour.

It’s clear to see the appeal of Chiddy Bang’s creative output: bouncy, colourful, erratic, and never afraid to poke about in the richly-lined drawers of music history. But how do they define themselves? “Today the lines of genres are being blurred out,” says Xaphoon, “people have iPods with hundreds of genres.” This diversity of taste is reflected in Xaphoon’s own intense cataloguing of musical influences. He credits a number of producers and artists in helping craft and evolve his sound: “Boi-1da, the Knocks, the Neptunes,” amongst many other mentions, “combined with a heavy dose of ADD.” “I don’t have ADD,” clarifies Xaphoon, referring to the attention deficit and impulsiveness he sees in his target audience, “but the people I make music for do.”

So what next for Chiddy Bang? How about setting a new Guinness World Record for a start? In March 2011 at the MTV O Music Awards, Chiddy broke the record for longest freestyle rap, setting the benchmark at just over nine hours and sixteen minutes. Riding out the enormous success of debut album ‘Breakfast,’ Chiddy Bang are not short for work over 2012, and are currently in the middle of a comprehensive worldwide tour. On future projects the duo are coyly non-specific, but Xaphoon is ambitious: “Chiddy’s going to be writing with tons of pop artists and rappers, […] I’m going to be producing with other artists and writing with them.” It seems the next stage in the Chiddy Bang viral strategy is to infect as broad a spectrum of popular music as possible: “spreading it out,” refines Chiddy. And if their success to date is anything to go by, Chiddy Bang will be invading our unconscious musical tastes whether we want them to or not. But what is there not to like? The incredibly charismatic ego-trip of single ‘Mind Your Manners’ sets out the Chiddy Bang formula neatly: cheeky, fun, and unstoppably infectious. This is audio breakfast. Don’t be skipping it.

An edition of this article first appeared in 4Q Magazine, Issue 9, September 2012.